“Hare Krishna” is the beginning of a famous mantra, a popular term for a person who practices bhakti-yoga in the Krishna devotional tradition, and a popular name for ISKCON and other like-minded religious institutions grouped under the term “The Hare Krishna Movement”.

“Hare Krishna” are the first two words of the famous mantra:

This is also known as the maha-mantra, which means the “great” mantra, and it’s widely recognized as the most powerful of all mantras in the yoga tradition.

The first word, Hare, is an invocation to Radha, the feminine aspect of God. Krishna is the name of God meaning “the all-attractive.” And Rama, another holy name, means “the source of bliss.” These are the three sacred sounds of the maha-mantra. Bhakti-yoga masters explain that the maha-mantra is a powerful means to establish a connection with God in the mood of attaining loving service and divine protection.

Fifty years ago, to the day this post was written, a saintly guru arrived in America. His name was A. C. Bhaktivedanta Swami Prabhupada (pictured above leading a roaring kirtan with the Hare Krishna mantra in Los Angeles in the early 70s). This great guru of the devotional Krishna bhakti-yoga tradition traveled to America with the goal of teaching this ancient tradition, which he called Krishna Consciousness to the people of the Western World. Because chanting is one of the core practices of this tradition, both in meditation (see here a video of how to do mantra meditation) and in group form, known as kirtan, his followers soon became known as the “Hare Krishnas”. 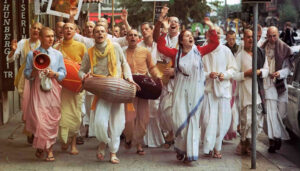 In the beginning, all “Hare Krishnas” were members of the same institution, founded by Swami Prabhupada, formally known asISKCON – International Society for Krishna Consciousness, and just about all of them wore robes.  To this day, when people think of a “Hare Krishna”, they tend to associate it with an orange-clad monk, with shaved head and sikha (a tuft of hair), or a woman wearing a sari.

These days, however, you’ll be hard-pressed to identify a “Hare Krishna” devotee, as more than 99% of them are active members of society dressing regular Western clothes – from soccer moms to Wall Street traders, and even including a Congresswoman. 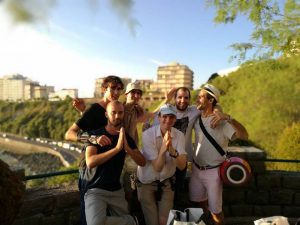 Even while chanting Hare Krishna in the streets, devotees will use regular Western clothing as pictured above. 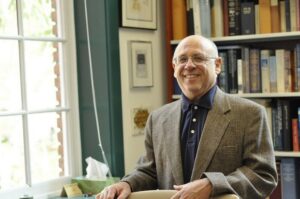 My teacher, H. D. Goswami (pictured above), under the banner of Krishna West, began to emphasize the need to present “Hare Krishna” teachings in the West with no Indian ethnicity, most especially no use of Indian clothing, such as dhotis and saris, as they are not part of these ancient spiritual teachings, and have become a distraction or barrier to them for Western people.

There are now many different religious institutions alongside ISKCON (though ISKCON is by far the largest) who emphasize the importance of the Hare Krishna mantra, and many independent, non-affiliated practitioners and spiritual teachers as well,  all part of what is known as “The Hare Krishna Movement”.


Warning: Use of undefined constant php - assumed 'php' (this will throw an Error in a future version of PHP) in /home/www/3tpath.com/wp-content/themes/twentytwenty-child/template-parts/content.php on line 152